by Flue
in FASHION, NEWS
0 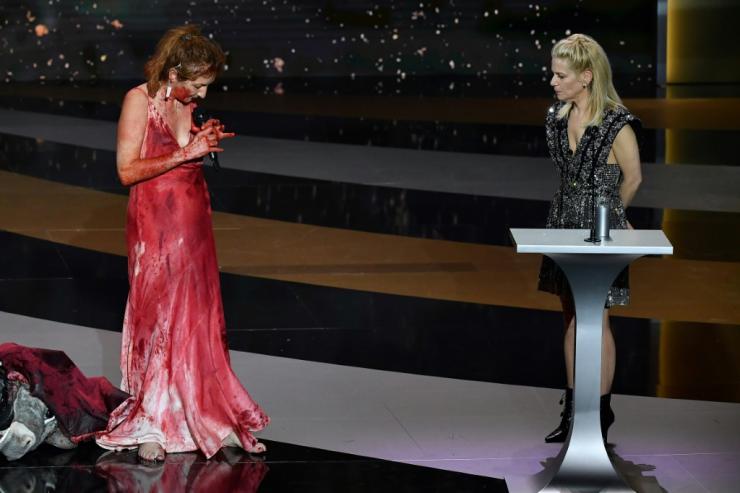 French actress stripped naked at the nation’s prestigious César Awards to demand more support for the country’s struggling arts industry. The French cultural industry has been hit hard by the coronavirus pandemic.

Corinne Masiero, 57, took to the stage at France’s equivalent of the Oscars. She wore a fake donkey skin and a blood-stained dress to present the best costume award before undressing.

The actress had “no culture no future” written on her torso and “give us our art back, Jean” on her back. It was directly pleading with French Prime Minister Jean Castex.

Cinemas and theatres have been closed since October 30, as announced two days earlier by French President Emmanuel Macron.

This month, protesters occupied several large theatres across the country to demand “a reopening of cultural places, in compliance with health rules,” according to a students’ press release at the National Theater of Strasbourg.

COVID impact on the industry

On Thursday, the government acknowledged that “the cultural industry is one of the sectors that have been the most impacted by the covid-19 crisis”. Moreover,  they announced an additional 20 million euros ($24 million) in support of the sector.

“Without political will, we won’t be able to preserve our system, which is so virtuous. My children — who are 6 and 8, wonderful age — can go to Zara but not the cinema it’s incomprehensible,” said producer and director Stephane Demoustier, referring to the high street clothes chain.

According to figures released by the French public health agency, France’s coronavirus death toll reached 90,146 on Friday. The government raised the alarm over rising pressure on hospitals in the Paris region.

Another 316 deaths were reported in hospitals nationwide on Friday, compared with 265 on Thursday, figures showed.

Jennifer Lopez and Alex Rodriguez call off their engagement