The Berserk Shooting of Boulder, Colorado

by Flue
in Featured, NEWS, POLITICS
0 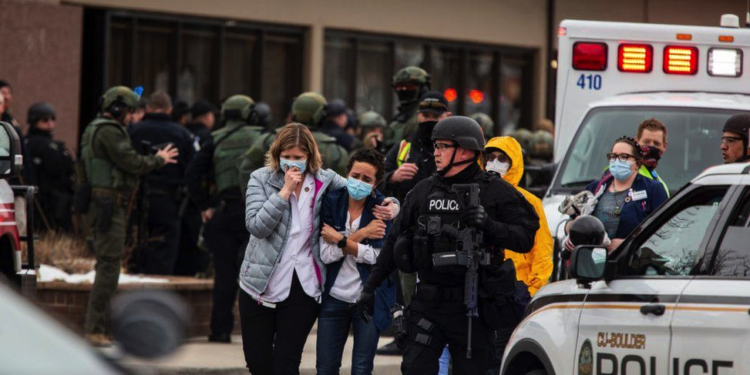 March 22, 2021
Horrific berserk caused outrage within the city of Boulder, Colorado on the 22nd of March, 2021 when a Mass-Shooting caused chaos inside the “King Snoopers Grocery Store”. As reported. 10 individuals lost their lives in this carnage.

Here are their stories:

Rikki was the current Store manager. Her Uncle, Bob Olds spoke to the reporters “Rikki was living her dream, She was trailing her dream of being a Store Manager at King Soopers. She was 25 years old, She didn’t get the chance to experience a lot of stuff that we get to experience in life. She was Ambitious. She had dreams.”.

Rikki was also told to be interested in wearing various Hair colors and Tattoos, As stated by her Uncle Olds “We never knew what hair color Rikki would have, What new tattoo she’d get done whenever she came back to the house. Her little brother is taking this incident really tough.”

As stated by Teri’s friend Lexi Knutson, Teri was an employee of King Soopers for the past 30 years. She started working for the Store on May 23rd, 1989 as a Courtesy Clerk. “She would happily assist in the Store wherever she was called to do so”.

Teri was born in Colorado and spent her life in Denver. In a statement “Whenever she would hear about a Tragedious event, Teri would break down into tears and be sorry for the victims and always wanted to extend out a helping hand for them.” While absolutely shattered by Teri’s death, Her family is Thankful.
“She never had to live with the horrifying memories of the day, of her customers, of her co-workers. She would be overwhelmed.”

With an ambition to become a Pilot one day, “Stong was a cheerful, Helpful fellow” said his co-workers. “Denny was like an annoying little brother to me, We would pick on each other but still, Would stay in the circle of respecting each other at the same time.” Said Logan Ezra, Denny’s Co-worker.

The Facebook profile of Denny reveals that he’d been working for the Store since December 2018.

On Monday, Mr. Stanisic was a repairman and was called in to fix a broken Espresso machine within the store. Logan Ezra, A barista at King Soopers states,” Neven seemed like a person I’d love hanging out with after work, We started endlessly talking as soon as we met up at the bar in the Store. He had great morals, Even though we knew each other for 3 hours, It wouldn’t be wrong to say that Neven was a friendly, loving, and hard-working fellow.”

Trona, Also known as Lonna along with her sister Lisa Noble, Ran a Clothing store in Boulder named “Umba Love”. An Employee of Tralona said “Lonna was an extremely down to earth and loving human being, She said she’d rather make friends than sell stuff from her store. Molina also said, There’s nothing I can describe her with, She was just so amazing.”

Mrs. Fountain. Aged 59, Used to work at a Venue known as eTown hall in Boulder, A Washington post states.

The owner of the Venue, Miss Helen notified the newspaper “Suzanne and I were friends since the late 1980s, She was a joy to work along with. She was all about helping people. Suzanne had performed for the Denver Center for the Performing Arts. She also worked for signing old-aged seniors up for Medicare. She’s an unforgettable and Painful loss to us.”

Kevin lived a minute from the King Snoopers grocery store and would occasionally shop there, Erika told the news. Erika was Kevin’s daughter whom he walked the aisle last summer. Erika also said “My father was an outdoorsman, He’d spend most of his time hiking outdoors with my younger brother and all of our friends. He was a Neighborhood father.”

Murray, Used to work as a Magazine photo director, Told by her husband John Mackenzie. “Murray loved helping people so she stepped into work for Instacart. She was shopping for an order on instacard when this unbearable incident sorrowed our lives forever.” Her daughter, Olivia Mackenzie said, “She was the most beautiful, Astounding person in the world for me”.

Jody was a designer who owned multiple Boutique stores around Boulder and Denver. “She was an astonishing designer and we and every one of our clients loved her work.” Said her business associate Scott Schaefer. Her business partners tell us that they were in total shock and couldn’t believe that Jody was one of the 10 victims in the shoot-out. “It’s engrossing and interesting to see our range of emotions maturing from shock and disbelief”. Said, Schaefer, and Boyles.

Talley used to work at an I.T firm before joining the Police force at the age of 40. “Officer Eric was one of the first responders to the Scene. I have to tell you the heroic actions of this officer when he arrived on the scene.” Said the Police Chief Maris Harold.

President Joe Biden praised the bravery of Eric, saying: “Officer Eric did not hang-back, Making the ultimate sacrifice in order to save the lives of the people in danger. A true definition of an American Hero.