by Flue
in NEWS, SPORTS
0 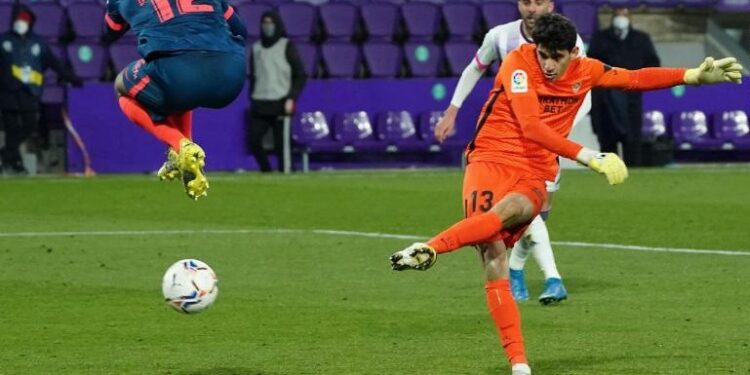 In the recent Match between La Liga teams, Sevilla and Valladolid, A goalkeeper named Yassine ‘Bono’ Bounou playing for the Sevilla team came out of nowhere to hit an Equalizer goal.

Yassine ‘Bono’ Bonou is a Moroccan, Canadian-born player who started his career back in 2011. Bono made his debut in Wydad Casablanca, A Moroccan sports club from Casablanca. Wydad AC considered to be one of the best and most successful football teams in Africa. Bonou moved to La Liga on the 14th of June 2012 as a third-keeper. He was later promoted to the main squad after the departures of Daniel Aranzubia and Thibaut Courtois. He made his first debut for the team in a friendly match against Numancia, Which his team won from 1 – 0 on the 24th of July, 2014.

After a worrisome game and no time left until the bell rang Sevilla’s had to come up with something to at least score one goal for the team. Valladolid was in the lead for most of the match and Sevilla’s team seemed worried about losing from 1 – 0. With no hopes and desperate to score at least a goal, Bono ran into the pitch to join the attacking team in the final minutes of the game. After a mild mix-up within the Valladolid’s defense, The ball made its way towards Bono who was around 8 yards away from the Net. Bono took the chance and took a striker shot towards the net, Making a goal for the team and ending the game at a 1 – 1, Hitting an equalizer goal.

Bono said on their club’s website that it’s a difficult feeling to describe. “I don’t know how to celebrate it, Two years ago, I came close to scoring here with Girona and that memory came back to me, so I could go up with the manager’s permission. The goal fell to me and I am very thankful.”

According to Sevilla, In the history of La Liga, This is the second time only that a goalkeeper keeper had scored a goal from open play, The first goalkeeper to do so was Daniel Aranzubia from Deportivo in their match against Almeria in 2011. This also marks this season as a first in which two different goalkeepers have scored a goal. One being Bono and the other being Marko Dmitrovic from SD Eibar, Marko scored a goal against Atletico Madrid from the Penalty spot back in January.

Bono’s unexpected goal has brought him great attention and made him the unlikely hero for saving the team by hitting the Equalizer goal last minute, calling the game to a tie.